I woke up bright and early to continue doing the morning 6.30am field checks, to get the complete lambing experience. Farmers work tirelessly at all sorts of crazy hours to care for their livestock, so I wanted to help as much as I could by completing all of the optional shifts.

On this day, there were many unfortunate cases and birthing complications that I was yet to encounter. It started with the field checks. It had been a cold evening compared to the previous nights, so I had to identify the dead lambs spotted around the field to take back. This meant we had to catch a lot of sheep so that they could adopt one of the pet lambs if they were producing milk. Some times the chases were tactical, cornering the sheep or waiting and catching her unexpectedly, other times it was a case of diving and being dragged across the grass. It was 6.30am, so once I got hold of a ewe, I was definitely not letting go even if I had a face of mud. 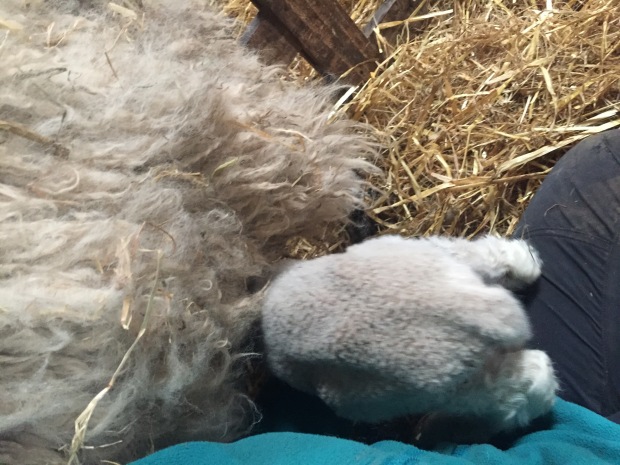 When I arrived back at the barn, I rushed inside to heat up colostrum for all of the live lambs we took from the field to be mothered on. I injected one of the lambs with pen and strep because it was shivering, and likely had pneumonia.

On the second field check of the day, I had an easy lambing of a single, although the ewe was straining, she accepted her lamb which is always a huge relief.
I then lambed twins, the second one was quite difficult to manipulate out as its head was far back. However, once I had hold of the lamb, I managed to carefully pull it out. The farmer told me to go back in and check that there wasn’t a third as the scanner man said triplets before confirming twins. (Just twins!). During my lambing placements, I did not lamb triplets, so this is something to look forward to for a future lambing week.

I caught a struggling ewe in the field so we brought her back to the farm as the lamb was coming backwards. Injected oxytocin intramuscular injection and loxicom subcutaneous injection. As the umbilical chord will break, the lamb’s head needs to be out very quickly in order to take its first breath rather than inhale fluids and drown. Oxytocin helps the womb contract and cleanse and stimulates milk dropping. As the lambing was a struggle, I stomach tube fed colostrum to the lamb to ensure it had the essential antibodies.

As soon as I finished tubing the lamb, another ewe came in and I was warned it would be one of the odd lambing cases of a rotten corpse. Even though I had the smallest hands, I struggled to get my hand into the ewe’s vagina to help her to deliver the lamb. The lamb was rotten, the mother must have aborted a while ago because as soon as I carefully began to pull, a leg came off. After I got the lamb forward, and got half out, I handed the case over to another volunteer as the best intentions for the sheep was to get the lamb out ASAP. I inject the ewe with lexicom (alleviation of pain) and hexasol (anti-inflammatory and the long-acting antibiotic oxytetracycline). Fortunately, she survived and I only smelt of a decomposing body for a day.

There was another suspected abortion case, however, the farmer believed the ewe had absorbed the foetus as on examination, there was no lamb.

I then cared for a lamb with a swollen head as he could not suckle. If a lamb presents head first, and is stuck for a while, the head will swell which makes lambing even more difficult as the head needs to be pushed back in to bring the front legs forward. Although it will reduce in size over time, the lambs are often unable to feed, so like the pet lambs they need to be given colostrum. During my time lambing, I tried to get them to suckle rather than opting for stomach tubing, as this will stimulate the mother to produce milk and increases the bond due to the maternal instinct. Stomach tubing/bottle feeding is the last resort.

Before the general evening jobs and the task of feeding all of the pet lambs before bed time, I castrated lambs that were ready to go out in the field.